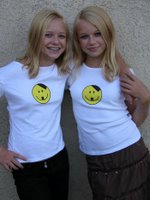 David Farrar posted the pic of these cute young teen racists a while back.

There is an anti-Prussian Blue blog, but unfortunately it is unlikely that these girls will get any serious exposure to thinking more carefully about the world until they leave home. Remember, most of what they get from the non-racist world is hatred and anger, which wont inspire them to think twice about racism.

The racist Prussian Blue allegedly plan a tour to Australia - um, great timing?
Posted by Libertyscott at 5:27 am