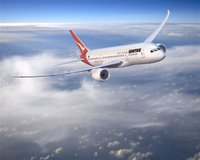 Qantas has announced it has ordered 65 Boeing 787s for itself and its el cheapo Jetstar subsidiary (which is going to fly low cost international services long haul) with options on another 50. These will replace the 767s which have long provided some of the services to and from New Zealand.
Besides fuel economy etc etc, the most notable thing about 787s is that there will be larger windows and higher humidity levels, so you wont be so dehydrated on long flights. The plane will be largely made of composites, so higher humidity levels will not corrode the fuselage. I'll be happy with larger windows and more humidity, it is not pleasant spending 12 hours in the air and waking up feeling dessicated by the artificial atmosphere.
Air NZ has already ordered 4 787s as the second customer for the plane to replace its 767s on medium distance flights to Pacific destinations, Australia and Asia.
Related to this, Qantas is not buying any aircraft to operate London-Sydney non-stop, partly because neither Airbus nor Boeing could make a plane guaranteed to fly that long non-stop fully-laden, and also because the demand was unlikely to be sufficient (it would have commanded a premium fare).
Posted by Libertyscott at 11:55 pm