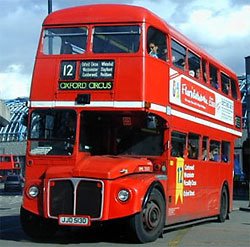 Well everyone, after an awful week after going to Munich for a day, and then getting a virus that had me stuck in bed till yesterday – I am back and enough is getting me angry or excited to start posting regularly again.

In London, the big news last week was the demise of the much loved Routemaster double deck buses. These buses replaced the trolley buses in London from the 1950s, and are one of the symbols of the city. Mayor Ken Livingstone who when elected said you had to be a “ghastly dehumanised moron” to want to get rid of the Routemaster. Well he did it – the remaining Routemasters have been withdrawn from scheduled service, though some retain for tourist routes.

Funnily it was a Labour Transport Secretary in 1967, the leftie nutcase Barbara Castle, who sounded the end to the production of Routemasters by nationalising bus services and subsidising the purchase of rear-engined buses.

Now I’m not one to say the public should subsidise an adequated mode of transport. If private bus companies can run more efficient modern buses, that are cheaper to maintain and operate than the Routemaster then so be it. However, this is not what has happened here. Instead the Mayor mandated the ending of the Routemaster, and he did it because the disability lobby have cried about how inaccessible the Routemaster buses are to people in wheelchairs. The fact that most tube stations are completely inaccessible, and that a subsidised maxi-taxi service for the wheelchair bound does not concern these “human rights activists”. To them, there is a right of everyone to use private property, and if they can’t fit, then make it happen.

"Those who defend the Routemaster should have a long hard think about the impact of their views," said Bert Massie, chairman of the Disability Rights Commission. "Wanting to hang onto a vehicle that many people can't use is based on the principle of segregation - in effect you cut off a large number of people from using one form of transport."

There have been the odd murmurings that Air NZ is breaching the Human Rights Act with its upgraded Boeing 747s, because people in wheelchairs cannot access the new Premium Economy Class cabin which is only located upstairs. The next nonsense will be rental cars with chauffeurs for the blind because “they have the right to independent travel” anything else would be “apartheid” or “segregation”.

I'm sorry, you don't have a right to any product or service - you have the right to offer to purchase a service, if the seller agrees, but you cannot dictate that someone must provide a service for you - regardless

On top of the disability argument (which holds less water with a survey that claimed 81% of disabled people wanted Routemasters retained), is the safety one. People get killed or injured falling off of the back of buses. Well tough! I am all for more stupid people getting killed from being stupid – it removes their chance to breed, and claim more from the rest of us. Every time some idiot walks or drives in front of a train at a level crossing, there are whinges and whines for “something to be done about it”. Something was done, human beings were equipped with brains – when you approach a level crossing, use your brain, if you don’t then you die – if you don’t have enough incentive to stop and look, then why the hell should we all be forced to pay for your incompetence?

So the Routemasters are gone, partly due to a politically correct obsession with people in wheelchairs, partly because of an obsession by the left to wrap people in cotton wool in case they hurt themselves, but also because they are old and not very fuel efficient. If Transport for London abandoned subsidising buses and let the private companies operate the routes and buses they wanted, then we’d know whether Routemasters should be retained. I’ve ridden on them a couple of times, and while they are quaint, by and large they have rough hard suspension and are not that comfortable – but then I don’t find riding by bus to be much fun most of the time for the same reason most public transport isn't much fun - there are lots of other people sharing your space and air!
Posted by Libertyscott at 12:45 pm