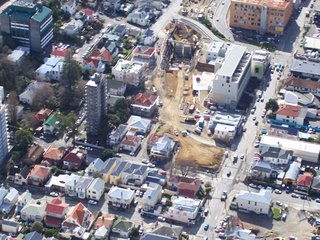 After years of wrangling and the Greens threatening to pull support from the government on the issue, the Wellington inner city bypass is nearly completed.
^
It’s a modest road, mostly involving a new 2-lane one way street to complete a one way system of existing roads across Te Aro, linking the end of the motorway with the road network near the Basin Reserve. It shifts one of Wellington’s main corridors one block south of the city, removing one set of traffic lights. It is a far cry from the 4-lane cut and cover tunnel motorway once planned (which would have been far better). This road only costs about $40 million, and if you had listened to Sue Kedgley and the Greens, you’d think that Wellington has been blighted by destruction across the heart of Te Aro. In fact, a lot of government owned buildings (bought over many years as they came up for sale) that were run down have been moved and are being restored, and others without heritage classifications have been demolished. The bypass will cut traffic on Ghuznee Street dramatically, and reduce congestion on Taranaki Street, as well as providing a more efficient route across town.
^
Transit is giving people the chance to walk the new section of road on the 16th and 17th of December, so give it a go. Don't worry if you can't, almost all of the route has a footpath and cycle track along it. The northbound/westbound section will be open from December 28, with the completion of the project expected a few months later when the Ghuznee Street offramp is closed and southbound/eastbound traffic diverted permanently to Vivian Street.
^
If you take the walk, think about the hysteria and exaggeration spread by the Greens about this road. It is apparently "destroying a community", and Sue Kedgeley constantly lies about it being a "motorway extension", when it is hardly that. However, once it is opened I will post more thoroughly about how much distortion and nonsense surrounded this project - a currency that the Greens unfortunately trade in too frequently. It would be nice if they once admitted they are wrong.
^
Meanwhile, Transit has an excellent site about the project which should answer most of your questions.
Posted by Libertyscott at 12:28 am