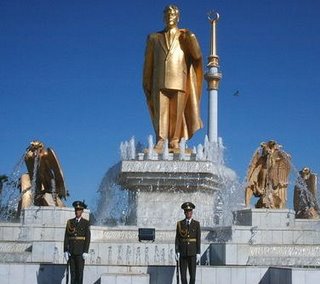 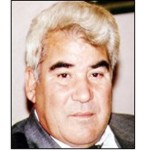 To round off a year of dictators' deaths, Saparmurat Niyazov or "Turkmenbashi" as he made his subjects call him, has died. I wrote about him briefly 13 months ago here.
^
Had Sacha Baron Cohen done his research properly he probably would have picked Turkmenistan rather than Kazakhstan as the subject for his succesful film. Although having said that, he may have needed protection had he done so.
^
Niyazov was only rivalled by Kim Jong Il for authoritarian power in the world today. Belarus's Alexander Lukashenko may try, but Niyazov is far closer to Stalin. Pinochet was an amateur compared to Niyazov. Reporters Without Borders rank Turkmenistan as having the 2nd worst press freedom in the world (after North Korea).
^
Niyazov was one of those dreary nasty Soviet Communist Party officials who worked his way to the top of the Turkmen Soviet Socialist Republic Communist Party, and ironically got his original position because Mikhail Gorbachev fired his corrupt predecessor. During glasnost and perestroika, Niyazov largely ignored what was happening elsewhere in the USSR. He supported the failed putsch against Gorbachev in 1991, and in the break up of the USSR inherited the Presidency of Turkmenistan.
^
He held an election and got 99.2% of the vote (!) and essentially continued the old USSR except in his own image (I hope Matt Robson, George Galloway and Chris Trotter observe since they miss it so such). It is a totalitarian state with any expression of political opposition resulting in imprisonment or internment in a mental hospital. The state owns and operates all press, broadcasting and publications. While water, oil and gas are "free to citizens" nothing else is and state set wages for the state owned industries (i.e. virtually all jobs) are very low. It's official GDP per capita (PPP basis) is similar to neighbouring Iran, but it is almost impossible to rely on official statistics from a regime which has been eternally optimistic. He maintained neutrality on foreign policy, allowing US military aircraft overflight rights in the war in Afghanistan, but also close trading relations with Russia and Iran. The EU even granted Turkmenistan MFN trading status, largely to access its oil and gas.
^
Niyazov had run a personality cult which was only rivalled by Kim Jong Il. His name and face are everywhere on billboards, banknotes, carpets, products and of course the news media is filled with his deeds. He wrote a philosophical book called the Ruhnama, which is literally the national bible. It is compulsory reading at school and must be kissed upon entering a mosque (Turkmenistan is Islamic, but Niyazov clearly created his own religion). Knowledge of the book is required for many jobs and even a driving licence. Criticism of even inadequate reverence for Ruhnama can land you in prison or even to face torture. He had built a gold statue that rotates to always face the sun (you can see it on google earth)
^
The list of bizarre features is too long for even this blog but here goes with some of them:
- He introduced a new alphabet and made it compulsory;
- The months of the year have been renamed with Turkmen heroes;
- Despite being wealthy with the world's 5th largest gas deposits, Niyazov spent many of the national wealth on projects such as a ski resort, an ice palace outside the capital, and a 130 foot pyramid;
- Banned beards;
- Banned car radios;
- Banned video games;
- Banned opera and ballet;
- Banned smoking in public;
- Closed all rural libraries saying rural dwellers don't read anyway;
- Closed all hospitals outside the capital Ashqabat saying if people are ill they can come to the capital (country is 488,000 square km in area!);
- Niyazov's short stature can never be mentioned (he was 5ft);
- Women under 35 cannot leave the country without having given birth to 2 children;
- Teachers wishing to earn more than the lowest pay scale had to write articles praising Niyazov;
- Officially defined adolescence as 13-25 and defined others (I'm a youth!).
^
I hope this results in real change, I hope the struggle for succession in Turkmenistan sees someone benevolent take over, free his country and avoid the vacuum being filled by Islamists thanks to neighbouring Iran. Turkmenistan deserves to have freedom unfold, while maintaining personal security, and for its people to see the fruits of its ample energy wealth. Good luck Turkmenistanis, my best wishes are with you that your age of madness has come to an end. With 60% unemployment, it is easy to see the risk that this could unfold into a whole bloody mess. Isn't socialist central planning truly wonderful?
^
Anyway I HAD to write that as I get ready to fly out of Heathrow through the blanket of fog!
Posted by Libertyscott at 10:52 pm

Yeah, I can see that lefties would love him.