50 years ago – brave people of Budapest 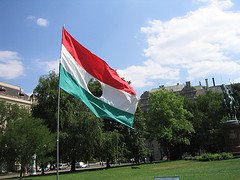 This Monday the 23rd of October will be the 50th anniversary of a key moment in the Hungarian revolution of 1956. In Budapest 20,000 protestors convened and sang the forbidden former national anthem including the line "We vow, we vow, we will no longer remain slaves.".
*
You see Hungary was on the wrong side as the war ended. Instead of receiving US aid under the Marshal Plan, it was forced by the USSR to grant reparations equal to around 20% of its GDP in 1946. Instead of developing as a free liberal democracy, political dissent was crushed as Stalin installed one of the most oppressive post-war communist leaders in Europe Mátyás Rákosi. Rákosi arrested, imprisoned, tortured and executed political dissidents at will. He nationalised industries and private property, and by 1952 average disposable incomes had dropped to two-thirds of the pre-war level, 50% of that decline had been in the previous three years. The communists impoverished Hungary more than the war did, and imprisoned the country.
*
However, there was some hope, which came with the death of Stalin in 1953 and three years later Khrushchev’s famous “secret speech” denouncing Stalin, resulting in Rákosi being removed. This encouraged students and the Writers’ Union to hold forums in Budapest discussing politics many calling for reforms and liberalisation. Disgraced Hungarian communist politician László Rajk, who had been executed six years before was reburied in an elaborate ceremony, as the party rehabilited purged officials.
*
On 16 October the banned Union of Hungarian University and Academy Students was re-established by students (ignoring the official pro-communist student union) and within days had a list of national demands for reform. The “sixteen demands” included:

- Immediate evacuation of Soviet troops, in conformation with the Peace Treaty;
- Secret ballot of all communist party members to elect new officials, a new central committee;
- Immediate institution of a new government under deposed reformer Imre Nagy and dismissal of all leaders from the Rákosi regime;
- Free universal elections by secret ballot allowing all political parties to participate (liberal democracy);
- Complete recognition of freedom of the press, radio and freedom of speech.
*
On 23 October, 200000 peaceful protestors had gathered outside the Parliament in Budapest. Communist Party First Secretary Ernő Gerő denounced the protestors on radio, after which the protestors moved to topple a statue of Stalin. Flags started appearing with the communist insignia in the centre cut out. The protestors went to the studios of Radio Budapest, where tear gas was thrown at them and shots were fired into the crowd. Gero requested Soviet military intervention and the next day Soviet tanks rolled into Budapest. Violence grew as increasingly the Hungarian State Security Police were willing to open fire on protestors, but some protestors were armed, some had defected from the army. The shooting of many protestors outside the Parliament cost the regime dearly. Gero resigned and fled to the USSR. Reformist Imre Nagy became First Secretary and protestors starting directing their ire at Soviet troops and remnants of the security police. Local revolutionary groups emerged in other towns. Eventually a ceasefire was negotiated, with Soviet troops withdrawing from Budapest by 30 October.
*
Nagy announced a “broad democratic mass movement” had called for reform. He disbanded the security police and created a government including non-communist Ministers, and he called for the abolition of the one-party state. Hungary was, for now, moving to be a multiparty democracy. Hungary also declared it would leave the Warsaw Pact, seeking the neutrality of its neighbour – Austria. Subsequently, the USSR decided to intervene on the pretext that a "Provisional Revolutionary Government" under János Kádár had called for Soviet support.
*
Premier Imre Nagy received assurances from ambassador and later to be Soviet Premier, Yuri Andropov, that there would be no Soviet intervention. A Hungarian delegation to negotiations in Budapest on the Soviet withdrawal was arrested by the NKVD (KGB’s predecessor). By 3 November, Soviet troops had surrounded Budapest and the next day, Imre Nagy begged for international assistance to protect his new reformist government. It was not forthcoming. The USSR vetoed a proposed UN Security Council resolution on the matter, and tens of thousands of Hungarians would be arrested and imprisoned, and hundreds executed, for supporting this liberal revolution.
*
Of course today Hungary can look back at this and remember with open minds. Hungary is a member of the European Union and NATO, never again threatened with foreign occupation without support. There is a House of Terror which is a museum for the totalitarian horrors committed under communism and the fascist regime that briefly ruled in the early 1940s.
*
Communists and socialists around the world became divided. Many communists, sycophantic of the USSR and communist China accepted the propaganda of the new regime and the USSR – tolerating Soviet imperialism. However, others were shaken – seeing the truth of the USSR and Marxism-Leninism, as a force that doesn’t tolerate dissent, and has little interest in what its subjects want. It was the first widespread challenge by people in a communist country that was seen and heard around the world – and it was crushed with little mercy. Those who died 50 years ago were vindicated in 1989, when the communist run Parliament agreed to freedom of association, freedom of the press and a multiparty electoral system. Hungarians today can see what Marxism-Leninism cost them – the just have to look next door at western Europe to see they are a generation behind in standard of living. They endured an experiment of 55 years, one that should be a lesson to us all.
*
A Victims of Communism Memorial is being built in Washington D.C. Dr Paula Dobriansky of the US State Department spoke at the groundbreaking of the memorial. She spoke eloquently of what this memorial means, and how important it is to recognise the murderous legacy of communism as a movement and philosophy.
*
“Communism corroded the human experience of the 20th century. The sheer number of victims staggers and chastens us. Over a hundred million people died as a direct, and often intended, consequence of decisions made by Communist rulers. The innocent lost their lives in Katyn Forest; in the frozen gulag; on the streets of Budapest; in the fields of Cambodia. Those who did not die at the hands of Communist rulers suffered terribly under totalitarian regimes. They could not speak their minds; they could not travel freely; they could not realize their inherent potential; they had no say in the direction of their nation. "
Posted by Libertyscott at 11:17 am