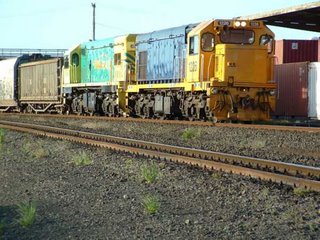 Just a quick comment on the hysteria about Toll saying it will close lots of railway lines. Some very straightforward facts:
*
1. Toll can’t close railway lines. They are owned by the government, which bought them back for $1 under the agreement that it would spend $200 million to upgrade it (and paid $81 million for the Auckland network separately). So it is up to Ontrack.
2. If Toll withdraws services, then its agreement with the government means that other operators can provide services. Presumably they will have to acquire rolling stock, but then Toll will have a lot of rolling stock that is of low value on the international secondhand market (wrong gauge, small dimensions).
3. If Toll moves more freight onto the roads then the government will NOT be up for a higher road maintenance bill that comes out of your pocket. Trucks pay road user charges, which broadly pay enough to cover the cost of maintaining the state highway network, and the marginal cost of each additional truck. The extra wear and tear on the roads will be paid for.
4. If the Napier-Gisborne line saw no more freight trains, there would be, on average, an extra truck every hour in each direction on that highway at the most. I think nobody would notice that, and yes the road user charges paid for that truck would cover the cost of maintenance.
5. The Greens claim there is an imbalance between trucks and trains and what they are charged according to the Surface Transport Costs and Charges study. The marginal cost case studies in that report indicate that road freight has lower environmental costs than rail in two out of the three examples measured. It also indicates than in two examples the Road User Charges paid are more than the costs the trucks impose on government. In other words, it is far more complicated that the Greens will say.
6. The trucking industry is not interested in the main trunk line closing, and has said so. It rightfully has argued that if Toll doesn’t want to use it, others should, assuming they are willing to pay
*
Lincoln University Professor Chris Kissling wants you to be forced to pay for rail maintenance and presumably a tidy sum to buy the monopoly rights off of Toll. I’m unsure why he thinks that all New Zealanders and businesses should pay for a handful of businesses to get subsidised rail transport. However as he says the rail network is “incomplete”, he must be somewhat mad – given half the network isn’t economic to maintain now, how can it be “completed” and be efficient? Where should lines go? Kaitaia? Nelson? It wasn't economic in the 1960s when railways had a statutory monopoly!
*
The answer? Sell the rail network. Then whoever values it the most can use it and charge for its use as it sees fit. Then comes the highways.
Posted by Libertyscott at 10:21 pm

You just couldn't keep away from rail could you! At least I have managed to pass the policy mantle on to others and I merely deal with funding amounts. But clearly rail is becoming a bigger issue here. I expect to see a comment from you regarding events in North Korea. Take care.
Marian