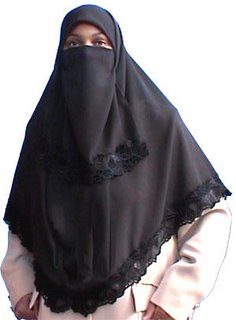 Now as a libertarian I hold that individuals have the absolute right to decide what clothes they were on their own property or in conditions where there are no prescribed limits by the relevant property owner. This means that Muslim women have the right to wear the niqab which completely covers their face. The state should not limit that, except when it interferes with the state undertaking its legitimate duty (e.g. law and order, in identifying suspects to a crime).
*
However it does not mean that there is a right to wear it on any elses property, including at work, school or in a shop that is not yours. As a property owner I have every right to establish a dress code, and dress codes are common in workplaces, bars and aeroplanes among others.
*
So the current debate in the UK about the niqab should not be about having that choice – and few would deny that. It should be about what that choice means, which is not a matter for the state but a matter for society and culture. In other words, it is about declaring that the niqab is, as the Ayn Rand Institute states, “a demeaning, barbaric article of clothing that inculcates shame in women, depriving them of individuality and femininity."
*
Some feminists say it is wrong to tell women what they should or should not wear. Well it is wrong if you only tell women (not men) or advocate that the state should say. Freedom includes the choice to cover up, but the whole basis of the niqab is that women should be ashamed of their bodies and faces, and not only should they cover those parts of the body that men (remember lesbians and homosexuals are non persons in Islamic culture) typically find attractive, but faces – one of the key indicators of human identity.
*
Does it mean that one should harass women who wear the niqab? No. People have the right to wear what they wish without feeling threatened, but others also have the right to prohibit people wearing them on their property or to express disquiet and their own discomfort with women who would rather remain anonymous in public.
*
Let’s not forget what in Islam promotes the niqab. It is a misogynistic, homophobic, shame ridden view of humanity that depicts women as only having identity in relation to their husbands, sons and fathers. Women's success in Islam is only if they can hide their femininity, as if they will be judged as sex objects first and minds and hearts second. Feminists may sympathise with this, but it is more than that. It is the vapid notion that if a man sees a women's face, he will get an erection and be unable to control his "natural urges" and is distracted, and this is wrong. What utter nonsense. What an insult to women to say that the solution is for THEM to cover up, as if they are titillating prostitutes "asking for it" and what an insult to men to say they are judge knuckle dragging cavemen, who rape any women they find attractive. This is a culture that has seen over 4000 people executed in Iran for homosexual acts since the Islamic revolution. It is even allowed to beat women for sexual misconduct as long as no mark is left on them.
*
How can feminists in the West even start to defend this barbarity, this stone age backwardness that sees violence towards women as acceptable? If it were being promoted by Destiny NZ or the Catholic Church it would be considered intolerable. So why is it not intolerable when promoted in Kabul, Tehran, Riyadh or London?
*
Now there are scholars of Islam who reject the niqab and rightly so, and this may form the basis of a modernist critique of Islam in the same way as Christianity went through the Enlightenment. All I can say is speed the day! If Muslims were, by and large, modernists that accepted Islam on a personal level, but respected individual freedom, choice, personal and property rights of others then we would be light years ahead of where we are today – because there would be no Islamic governments.
*
The only way to confront the barbarism of Islamists is to do as the Ayn Rand Institute states which is to point out the superiority of Western civilisation. Its advice to Britons is:
*
“They must understand that what made the West great is individualism, reason, the pursuit of happiness--and that this is objectively superior to the tribalism, superstition, and earthly deprivation that many Muslims seek to live out and bring to Europe. Britons must reject the insidious idea of multiculturalism, which holds that all cultures are of equal value. Cultures are not of equal value: prosperity is superior to poverty, happiness is superior to misery, freedom is superior to slavery, and a visible face is superior to a slit revealing two anonymous eyes."
*
Islam can continue to survive under Western civilisation, if it is merely a set of religious beliefs to guide people's own private lives, not a diktat upon non-believers or an excuse for violence.
Posted by Libertyscott at 5:09 am