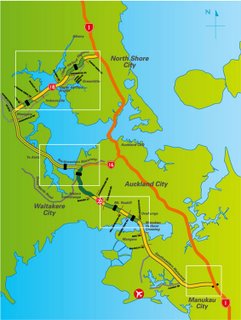 I was in Auckland for the first time in about a year just this week. While trying to make my way from Ta Atatu to the Airport I wondered to myself,

So I guess if it were constructed, at least one person in the world would see some benefit. Anyways, I'm back in Wellies now and we've got our fair share of trasnport issues too ;)

This is part of the problem- NZ has lost it's will to do public works projects of any kind- they just get bogged down by parasitic politicians, lawyers, consultants and accountants.

This kind of project should unquestionably be built, even with the looming oil crisis. If nothing else, it will build a skills base and a generation of roadworkers who don't have to sell P to make a living.

Kiwis are all talk and no action.

Well the Mt Roskill extension is funded, economic and should be competed - that gets people from near Avondale to South Auckland.

Uk_kiwi - the NZ road contracting sector is booming already, big road projects all over and there are plenty being trained - tons of action. I'd argue it is overheating putting the price up. Once the other parts of the road are built, then serious consideration can be given to the final link - but $1.6b is a lot of money for that final stage.