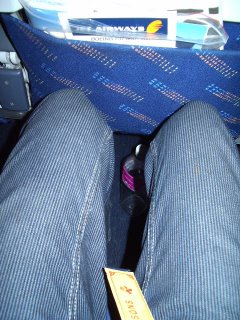 .
I'm not tall, but I'm not short - I'm 5'10" - and long haul flights in economy class, with tight leg room don't please me, in fact I think it is uncivilised to sit upright for hours on end cooped up in an aluminium tube with dry air and sitting nearly on top of other people.
.
That's why a few years ago I learnt that airlines have different seat pitch - that is, the distance they place each row of seats from the other. The pitch is the measurement from one point of the seat to the exact same point in the next seat - so airlines with deep/thick cushioned seats might have great pitch, but little legroom, whereas thin, but modern contoured seats can give you more legroom with less pitch - got it?
.
So, while you might choose your airlines on the basis of fares, service, entertainment system and schedule, for me one important factor is room - I like space, and so I've done a bit of research into airline seat pitch, in economy, for airlines flying to and from New Zealand. The worst seat width is Emirates, it squeezes in a 10th seat per row on its 777s, whereas Singapore Airlines and Air NZ only have 9 seats. So here is the list, if I missed any I apologise, but these are only those flying to NZ:
.
AIRLINE SEAT PITCH
.
Air NZ Boeing 747 34"
Singapore Boeing 777 34"
Thai A340/747 34"
Malaysian 747/777 34"
Aerolinea Argentinas 34"
Emirates 777 33-34" (but only 17" seat width)
Garuda 33"
Korean 33"
Air NZ Airbus A320 32" (17.9" seat width)
Air NZ Boeing 777 32" (but 17.8" seat width)
Air NZ Boeing 767 32" (17.5" seat width)
Singapore Boeing 747 32" (17.5" seat width)
Cathay Pacific 32" (17.5" seat width)
Royal Brunei 32"
Lan (Chile) 32"
Air Pacific 32"
Air Tahiti Nui 32"
Air Calin 32"
Polynesian blue 32"
Emirates Airbus A340 31" (17.5" seat width)
Qantas 31" (17.2" seat width)
Pacific Blue 30-31"
.
So there you have NZ is one of the better ones with its 747, Qantas one of the worst. However, Qantas is there with other big airlines, like British Airways, Virgin Atlantic (which sometimes has as low as 29" seat pitch, but is standardising at 31"), United and Lufthansa - most of them are cheap on space in economy. Frankly 31" is an insult for a 12 hour flight, especially since Air NZ's domestic 737s has the same pitch for its domestic Saab 340s and ATR 72s!! It shows how little people travelling care about legroom!
.
Given that I've booked a trip back to NZ for April - in Air NZ's new premium economy class. Cost about $600 more above a flexible economy ticket to get 6 inches more legroom, and a slightly wider seat, and more recline, which is all I really wanted - the better drinks service and sitting upstairs are bonuses. There were only 3 seats left in premium economy, proving it is popular - as more people don't want to fly for 24 hours sitting in classic "scum class" as a dear drunken friend of mine once declared as she walked into economy on a flight to Singapore a few years ago. I'll let you all know what it is like once I've done it - remember airfares in nominal terms have not changed in 20 years - it still costs around NZ$2000 to fly return to the UK in economy class, as it did in 1985, it still costs NZ$7000 and NZ$12000 to fly business or first class (though only Emirates and Singapore Airlines fly the whole way first class now). So I'm not too fussed about paying a bit more for a bit more comfort, plus premium economy class is pretty much the standard (of seating) as business class used to be when it was introduced.
.
If you want more info about airline seating, go to Seat Guru and Airline Quality websites, they are unaffiliated with airlines and have reasonably up to date info about their seating.
Posted by Libertyscott at 9:23 am