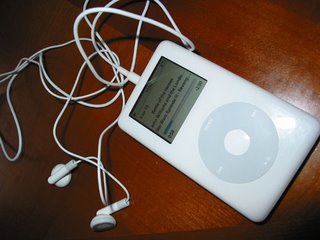 Having managed to achieve unemployment rates of 10%, forecast GDP growth of 1.9%, GDP per capita (on PPP basis) not far above Spain and New Zealand – the anti-success Nazis in France want to punish Apple for the success of the iPod.
.
Apple, after years of being ranked as the poor cousin of the IT sector, has had stunning success with the iPod, because it offered people a convenient, easy to use way of storing and listening to vast quantities of music. In association with that is iTunes, Apple’s online music store providing a legal way to buy songs to play on your iPod. However, the French Parliament says this is “anti-competitive” – as if the French Parliament ever produced a single thing that made people’s lives better without stealing it from someone in the first place.
.
CNN and the NZ Herald reports The French Parliament has passed a law forcing Apple to effectively open up its anti-copying technology so that iTunes songs can be played on players other than iPods, the same would apply to Sony and its Walkmans and music store.
.
Thieving Vichy-like bullies. France has produced much that is good in the world, and has food and wine that is immeasurably better than much of the salty sugary fat laden slop in Britain. They have healthier attitudes to alcohol, sex and aesthetics - I understand why the French can be arrogant about what is French. The language is far more beautiful than most and the passionate "joie de vivre" of the French is an example to the world, compared to the inert mind numbing nihilism of Anglo-Saxons, unless they are drunk and become either obnoxious or perverted. The French don't have page 3 girls in grotty tabloids, because it is no big deal for a woman to show her breasts off on the beach - it is just a fact of life, neither repressed nor obsessed.
.
Unfortunately, a great attitude to life is not matched by a lauding of commercial success. Yes innovation is lauded, the French were one-half of the team that made Concorde, the TGV high speed train, its commitment to nuclear power and the Millau Viaduct.
.
but IT? Sorry. You see IT innovators that aren't focused on major infrastructure or defence don’t reside in France much, as the tax and regulatory regime punishes success – why should Apple have bothered when the parasitical little busybodies in the French Parliament think those who DIDN’T invent the idea, didn’t make it successful ought to profit from it at Apple’s expense. .
Do you really think there would be iPods, Walkmen, compact discs, cassettes, DVDs, video cassettes or LPs if you let politicians decide? No. They would spend umpteen years arguing about whether it would be too expensive for the poor, whether not enough local content would be available for people to listen to – or whether the machines should have local songs already on them before they are sold blah blah blah.
.
France wants the Eurosocialist Union to support such a law – given France’s less than enthusiastic adoption of most European liberalisation measures (ever wondered why France has virtually no low cost airlines?) – the EU should tell France to bugger off and consider liberté as least as much as fraternité and equalité.
Posted by Libertyscott at 9:19 pm