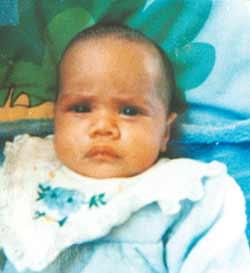 .
There are every so often, entities who make me angry enough to almost support the death penalty - except I don't think it is good enough for them.
.
Rachealle Namana - child killer - is one.
.
Setting aside the four years she spent in prison for ending the life of a baby girl, time she spent partying, taking drugs, downloading porn - because it is "impossible to keep contraband out", much like it is at hotels. You see we can screen people getting on flights, but not people meeting prisoners - but I digress.
.
Namana was pregnant with her 5th child (which, of course, she had no responsibility for) and was "taking out her frustrations" on 18 month old baby girl Hinewaoriki Karaitiana-Matiaha, known as Lillybing (pictured). Of course, her stepsister Terina Matiaha (Lillybing's "mother") would leave Lillybing with Namana repeatedly for long periods - so there is another unaccountable bitch. The existence Lillybing experienced, of a mother who didn't give a damn, and an auntie who abused her were clearly not the whole story. Lillybing had been delivered to Namana on 20 July 2000, without nappies - so Namana attempted to toilet train her by creating steps to the adult toilet, and smacking Lillybing's legs to make her go up. The next day Namana and her sister noticed a bloody discharge from her vagina but decided not to report it to the doctor - obviously fearing either one of them, or another of the extended family could be held accountable for abusing a baby girl.
.
"The toddler fell many times during the day and on one occasion sustained a large lump on her forehead. Following this she lost consciousness at least twice. Both sisters being trained in first aid, they applied an ice pack to the wound. This was followed with the application of a cloth soaked in boiling water, which burnt a layer of skin from below her eyes to the top of her forehead". Stupidity? or torture? Plain fucking evil letting a child be ill, lose conscious and then burn its forehead.
.
That night Namana and her sister spent some time at the local pub - hey, may as well have some fun while a child has been tortured.
.
"When Lillybing woke, the lump she had received the day before had become dark and the burn on her face was likened to a drying grass burn. She was unable to stop falling over and complained a lot." Namana got angry at Lillybing because she was crying a great deal and shook her violently, causing a brain haemmorhage that ended her life. She had a hematoma on her forehead, severe scald burns to her entire forehead, the top of her head, cheeks and eyelids, bruising to her chin, mouth, and loose teeth, cuts on her legs and thighs. It remains a mystery as to why Lillybing has suffered severe abdominal bruising and vaginal injuries, it doesn't really bear thinking about what vile entity is responsible for that.
.
So there you have it, Namana smacked her about, applied boiling water to her head, left her alone while going to the pub, ignored her vaginal injuries and shook her about because the poor baby girl was in agony and crying. Had Namana sold cannabis, or had this been a man who abducted Lillybing and tortured her, it would have been a different story - but Namana is a woman who killed a baby girl. Not intentionally, but recklessly and she couldn't really have given a damn.
.
So when a Labour Cabinet Minister tells you that this government is tough on crime - look at Namana, she got four years, enjoyed her time in prison and has no regrets. She didn't commit a sexual offence so there is no pressure to register her, or have her name and address notified - yet she is as abusive as any child molester or rapist - and should never be allowed near children ever again - but she is. Instead, Labour banned men who when 16 had consensual underage sex with their 15yo girlfriends from being bus drivers - because it is universally outrageous that men sexually abuse children - unfortunately, women physically abusing children is not seen as so serious.
.
Women's prisons are a joke if what Namana said is endemic, and one only wonders how Tania Witika, who is many times more evil than Namana, enjoys prison life.
.
So do you want the state to protect children from the likes of Namana and stop her from ever being a parent? I do - her sentence should have included a permanent ban on custody of children - as it should for all child abusers.
.
Lillybing's case
Posted by Libertyscott at 12:49 pm

I posted an item about this evil piece of shit over at Silent Running, but you've done a far better job of it.
Bravo!
And thanks. Time for Corrections to be held accountable for running bloody holiday camps instead of prisons. There's a "cultural" aspect to this that nobody's talking about openly but which needs to be addressed, urgently.
Keith.

Yes you're right, there is an insidious political correctness around discussing it because the offenders are Maori - well where is the Maori Party on this? Where is the seething outrage?

It's these sorts that swung me towards supporting the death penalty.

I worked in a prison wing full of baby killers and rapists, but she would be worse than even those pathetic excuses for men!

Fuckin' oxygen-theives, the lot of them!

and now that she is out, she wants your money to live on!

Im a bit late to the game, but I just have to tell you I cried reading your piece on this woman, not for her, for the child. You see, my last name is Namana, and this shit head of a woman is a relative of mine. Im usually one to stand up for my family, regardless of what they have done, but really they should have locked the bitch up and thrown away the key.

Thanks for your post Kara, you're quite right. It goes without saying that this sort of behaviour isn't something inherent, it's just evil and deliberate.

i was in that cast and sum of the parts in your storie that i was there but i with i new watt was going on.

Hi My last name is also of Namana I am proud of this last name but not for this sort of reason... i agree with everyone else dat that bitch should of rot in jail i have seen her around town an i have to avoid this bitch coz i just want to ring her neck i do back up my whanau but not this cunt i knew lillybing as a child an still remember her bueaty smile ......hate thoses bitches go to hell