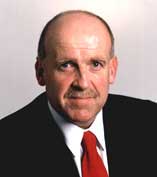 .
I have only one comment about DBP – I appeared in front of a select committee that he sat on, to present a submission on a Bill. He was rude and obnoxious, and wasn’t unafraid to express his contempt that “we” had even bothered to put in a submission. He asked questions about why a libertarian would be in an organisation, because aren’t we all individuals, he asked whether Libertarianz as a party really existed. He wouldn’t discuss the Bill concerned, wasn't interested in debating why he supported it, he just wanted to be abusive. Of course, as much as I wanted to tell him to stop being an uglier version of David McPhail’s Muldoon, I had to be polite – you don’t get allowed into select committees any other way.
.
What a prick.
.
I don’t really give a damn how much of a bully or pervert he was as a teacher – if there are people who are victims, then let them press charges or stand up in public to do their finger pointing. However, he is a bully, and he props up a government that used taxpayer’s money to campaign – the people of Dunedin South have a lot to answer for, and I hope the bastard’s political career is over as soon as possible.
Posted by Libertyscott at 4:40 am