How fair the state is 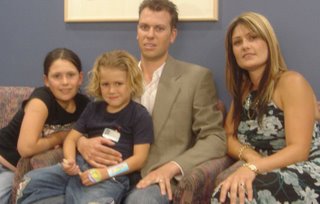 .
Rodney Hide, Silent Running and Sir Humphrey's have all blogged about the Penfolds. A family who have emigrated from South Africa, with two children. Their photo is common to the first two blogs.
.
The Herald reports that the reason why they emigrated was fear of crime:
.
"You live in constant fear that something is going to happen to your family", the 30-year-old father of two told the Herald yesterday. A number of his relatives had been victims of violent crime, and he was once held hostage during a robbery. "
.
The Immigration Department is deporting them in two weeks because Mr Penfold failed to advise them that he had changed his jobs. It was 10 months after he switched jobs before the Department was advised, so he and his family have been "overstayers" and are not welcome. It doesn't matter that he has been working, paid taxes and NOT claimed benefits, NOT committed crimes. No - this peaceful productive hard working couple and their children are to be treated as common criminals.
.
On the other hand, Ben Haerewa, Belinda Edmonds, James Martin and countless others shall stay. Haerewa is up for parole in April next year, but will be out in September 2011. He only killed James Whakaruru with a steel vacuum cleaner pipe and brass tack hammer. James Martin raped a woman on a home invasion in 1999, not his first time. I was at the trial when he was convicted of raping - in all conceivable ways - a woman who had been subject to brutal assault and robbery by three others moments before. He offered to help her, he raped her. Martin is up for parole in 2011, and will be out in 2017. Edmonds killed her six year old daughter with repeated blows to the head in 1999, after years of torture - she was released from prison in October 2005.
.
So that's New Zealand, one can hope Clayton Cosgrove can let the Penfolds stay, for being a peaceful family, enjoying their lives and no doubt adding to the lives of others. After all, we pay so the lowest of the low get a slice of bread and cup of water every day (if only it were that!), the type of people the Penfolds hopefully can avoid. New Zealand desperately needs to attract hard working, peaceful people - instead of treating them like criminals.
Posted by Libertyscott at 11:27 pm