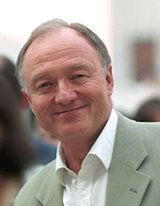 According to The Times Red Ken - Mayor of London - has said that areas threatened with flooding will be called Clarkson zones, because he blames Jeremy Clarkson for global warming and the possible “destruction of life on earth”. Nutter. Jeremy Clarkson hosts the most popular show on BBC2 (and Prime TV in NZ), "Top Gear". Top Gear is fun because cars are fun, they are enjoyable to drive and there are millions who agree - because personal transport is pleasurable.
.
Now free market me believes the only problem is that roads are run by politicians, central and local government - who administer roads for political purposes, not according to the demands of users or the costs. In some cases roads are overcharged, in others undercharged, so in some places roads are too good, others they are inadequate - pristine empty roads and congested roads - it's central planning gone mad. I support his congestion charging zone, though not the extension - and generally support road pricing, as long as it is efficient.
.
You see I am neutral on whether people should drive or not, it is their choice as long as they don't expect anyone else to subsidise them and take responsibility for their actions - but Red Ken hates cars – he doesn’t own one or even drive. He blames London’s traffic problems on cars, ignoring that London has only around 9% of its land area covered by roads, unlike the average of most cities of 25%. Greenies would celebrate that, but it adds enormously to the cost of transport - and the burden on the economy, environment and people's health. It is no pleasure walking extensively on many London streets because of it - buses get caught in it too - the famous Kings Road in Chelsea was often quicker to walk than to drive or catch buses down. However, without decent highways traffic is funneled down local 2 lane streets.
.
Of course, the fact Ken uses London citizens' council tax to pay for buses to run, empty or not, doesn’t help either. The Strand is full day in day out of nearly empty buses clogging up the lanes – bus subsidies promote bus companies running services regardless of demand. Ken’s policy of free bus rides for under 16yos also encourages them to bus instead of walking – hardly environmentally or health friendly (or passenger friendly).
.
London would reduce emissions if a network of toll highways was built as originally planned (planned to be free, but tolls would ensure demand was reflected with user pays), completing the inner circular highways, even if tunnelled to avoid impact on the local environment. The tolls would restrain growth and the highways would remove cars from local streets, speeding up bus travel and reducing health impacts – but don’t expect Transport for London or Ken to support that – roads are evil after all. Far better to have pedestrians and cyclists choking with exhaust fumes from buses, trucks, cabs and cars.
.
Don’t say people should catch public transport, only 13% of peak commuting to central London is by car, it would be difficult to increase the public transport share much more. London public transport is excellent, although at peak times is at crush capacity (and it isn't efficient to provide more capacity). Most motoring in London is suburb to suburb, where it takes far longer to bus than to drive (a bus takes a more circuitous route and stops a lot after all) and these orbital movements will continue to grow. London has one of the worst roading networks of any major city in the world – it simply needs to let the private sector provide, and to let it toll freely to pay for it.
Posted by Libertyscott at 11:10 am

In related news, a new series of Top Gear starts (in NZ) this Sunday, 7:30pm on Prime.

For you lucky buggers in the UK you get hot off the press episodes.

The latest one was a 'best of' - Clarkson in a Bugatti Veron, and the other two on scooters, a piper light plane and then a double-decker bus, in a race between Southern France/Northern Italy (?) and the BT Tower restaurant.

Ah you are all getting the final series from last year. Car ownership levels in the UK are substantially lower than several European countries - and will only be going up with prosperity, it is no different from China and India.

Funny post, WTF was Ken thinking! I have seen Clarkson driving around in a convertible jag not far from my house. He is a funny guy, and while I'm a leftie myself I like his sense of humour and the counterbalance he gives to the endless gloomy lefties here. As if anything he does will affect the climate, that's pretty ridiculous. Surprising to see you have jumped on the bandwagon with the comment about reducing emissions?

As for the transport issues, well I would like to know any city in the world that has built its way out of traffic congestion. It's just not a successful strategy, and toll roads just provide roads for the rich at the expense of everyone else. Just look at the Sydney toll roads, where the council secretly agreed to 'force' more users into the toll road and block the free ones as part of the decades-long contract, which incidentally vastly overestimated the revenue generated. That is the kind of debacle you get when making money is the sole priority. Any toll road here would stall other transport development, create massive externalities (NOISE being the worst) and the toll would likely never pay itself off unless people were forced to use them. Most users will always take the free option if it's available.

The motorway system in London is pretty extensive in the North, but the high population and car density means every new road is jammed as soon as it is finished, (blatant example M25) so I would personally rather have them jammed with buses than the 1-person-per-SUV crowd. The high streets here are better than Auckland in terms of congestion IMHO.

I agree it's great that there are many more options to getting around for the most part. The trains and buses are very efficient- a single full tube train can take 1000 passengers, every 2 minutes, from every corner of London. Not a bad way to get around- pity privatization has ruined it by putting profits above maintenance. The rail privatization in the UK is an epic disaster, unless you were one of the fat-cats involved. Rail's share can be increased, simply by increasing the reliability and comfort of the service and stations.

IMHO there is a classic mistake in promoting the car over other forms of transport- you are 'fitting' the problem to the solution you already have decided on. The problem is normally getting people to work in the central city from the suburbs, Monday to Friday. For most people there is no particular reason this has to be by car. As for the other problem of moving from one suburb to another, there is also usually no reason this has to be by car, and if they choose to take a car, would they pay a toll for the priveledge, given that intra suburb travel is likely to be lower value (i.e. not income earning)? Tunnelling is pretty expensive so I doubt that would be a realistic self-funding option which leaves the non trivial prospect of demolishing swathes of valuable 19th century properties, against the will of the communities who live there.

Interesting historical documents, I bet they never imagined the growth of the city today. The number of new housing developments around is just simply staggering, I really wonder how much larger this city can get. Will be interesting to see if the hard limits of water shortages hit this summer...

Toll roads are about providing very expensive roads for those who want to use them, and not subsidising them from the revenue of grannies who just drive down to the shop. With one exception, Sydney's toll roads are an immense success - easing congestion, improving access and limiting growth in traffic. The M25 was jammed because it should have been tolled and because there was so much traffic clogging local streets trying to bypass London.

I agree that there shouldn't be promotion of any one solution - which means no subsidies for any mode. Rail privatisation could have been done better, it was on the ridiculous premise that competition was essential in the rail sector, not recognising that rail has competition in road and air.

I simply think that private companies should have the freedom to buy land for corridors for tollways if they can - the buses can use them too of course! Not forgetting trucks - every set of traffic lights adds about 50p to the cost of a truck trip.